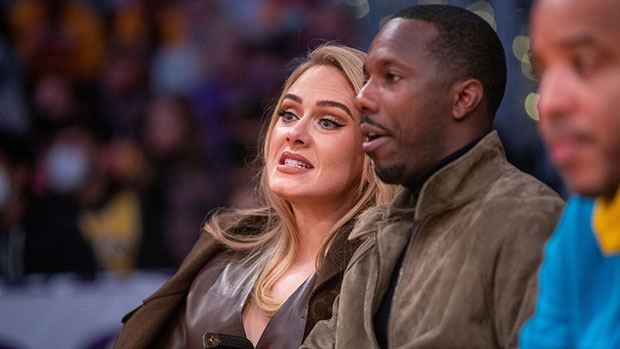 Adele will finally take over Las Vegas, on November 18, when her residency at Caesar’s Palace opens — 10 months after she stunned fans by cancelling all her scheduled shows just 24 hours before the opening night. But she’s now counting down the days to her first show and “epic celebration” with excitement — and so is her boyfriend Rich Paul. “He’s been by her side for a lot of the prep and he will be with her for opening weekend, which is fantastic because he’s amazing when it comes to keeping her calm,” a source tells HollywoodLife EXCLUSIVELY.

Adele’s spoken openly about suffering intense stage fight, even telling Rolling Stone in a 2011 interview: “I’m scared of audiences. I get shitty scared. One show in Amsterdam, I was so nervous I escaped out the fire exit. I’ve thrown up a couple of times. Once in Brussels, I projectile-vomited on someone.” Although there’s no guarantee pre-show nerves won’t suddenly hit when she takes the stage for Weekends with Adele, according to our source the 34-year-old “Easy On Me” singer is in a “great place” ahead of her upcoming performance. “She’s not in a position where she needs Rich to prop her up, she’s in a great place when it comes to the show and life in general. She’s in full on prep mode right now so the focus is on eating very clean, getting lots of sleep and resting her voice so she can be tip top for her shows.”

As HollywoodLife previously reported, Adele has been “rehearsing 12 hours a day” and has “put her heart and soul” into the concert and she’s now ready for an “epic celebration,” beginning on Friday night. Not only will she have her sports agent boyfriend, 40, with her for the special show, her 10-year-old son Angelo, whom she shares with ex Simon Konecki, will also be there cheering her on. She’s also got “a ton” of close friends flying in from all over the world to see her sold out Las Vegas show.

“Adele cannot wait for her residency to kick off, she’s more than ready,” a source previously shared. “She’s put her heart and soul into preparing, she’s been rehearsing 12 hours a day and every little thing is in place and perfected. At this point it’s just a feeling of wanting it to hurry up and be opening night because now that everything’s ready the waiting is tough, it’s like the countdown to Christmas morning or something.”

Adele was initially set to kick off the residency on January 21, performing two concerts per weekend until April 2022. But in a tearful video posted to her Instagram on January 20, she told her millions of fans that she “tried absolutely everything” for the show “to be good enough” but it had been “destroyed” by both COVID-19 and “delivery delays.” She added, “I’m so upset, and I’m really embarrassed and so sorry to everyone that traveled to get here. I’m really, really sorry.”

Adele’s shocking announcement was met with outrage from fans and in the September 2022 issue of Elle she opened up about the rock bottom moment she had to pull the plug on her concerts.  “It was the worst moment in my career, by far,” she said in the interview. “By far. I was so excited about those shows. It was devastating.”  Fortunately, Adele’s fans were forgiving and she had no problem selling out her new dates. Weekends with Adele is scheduled to run until March 2023.