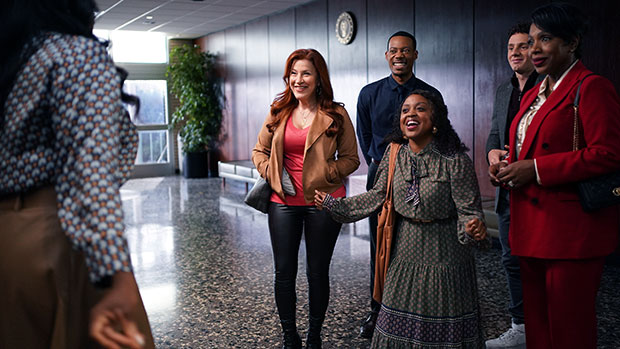 Abbott Elementary was the breakout hit of the 2021-2022 TV season. The ABC comedy has now racked up 7 Emmy nominations, including Outstanding Comedy Series. Fans are anxiously awaiting the arrival of the second season, which will give us a glimpse into the lives of the teachers when the last bell rings.

Quinta Brunson, the show’s creator, star, and executive producer, spoke EXCLUSIVELY with HollywoodLife about which character she’s most looking forward to exploring outside of school. “Gregory’s because he’s just an interesting character to keep digging into. He’s fun to write. Every character is fun to write, but I have a lot of fun writing Gregory,” Quinta told HollywoodLife at the HCA TV Awards — Broadcast & Cabe on August 13.

Quinta stars in the comedy series as Janine, one of the second-grade teachers at Willard R. Abbott Elementary School. Throughout the first season, Janine was in a long-term relationship with Tariq, whom she had been with since seventh grade. Janine and Tariq broke up in the season finale on good terms.

HollywoodLife also spoke with Justin and Pat about the Janine and Gregory situation in season 2. “It’s like, wherever we end up with those two — and we genuinely at this point don’t know — I think we want to earn whatever we’re getting,” Justin told HollywoodLife. “We also want to make sure that our characters, especially our series regulars, who we care about and the audience cares about, that whatever place we get to with them that people feel like we earned it and that we didn’t rush anything. We also didn’t flip something on its head, which makes everybody feel sour. Nothing we will do will not have the breadcrumbs laid and [will] feel very earned.”