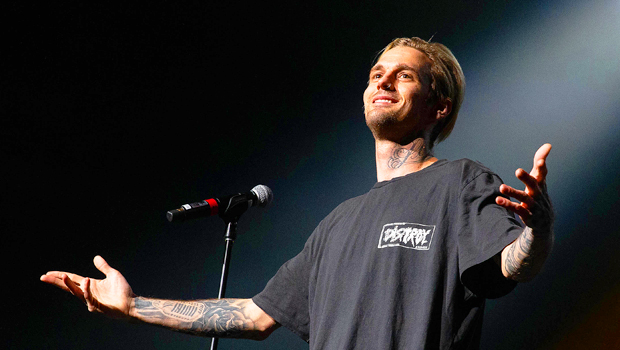 Aaron Carter is a first-time dad! The singer welcomed a baby boy named Prince, a nod to the late Michael Jackson, with Melanie Martin.

Aaron Carter is a dad! The singer, 33, has welcomed his first child, a baby boy named Prince Lyric Carter, with fiancée Melanie Martin. He shared a photo of himself cutting the umbilical cord from the hospital room on Instagram on Monday, Nov. 22.

The “I Want Candy” singer revealed that Melanie underwent an emergency C-section after 13 hours in labor, but that she remains in “great health.” He wrote, “thank you lord and the incredibly sweet loving staff here. Prince is precious I love you son. Your mommy loves you as I drop tears on the phone.”

He added that he was “so proud” of his fiancée, adding, “Love you with all my heart my beautiful blessings from god.” Ahead of Prince’s arrival, Aaron confirmed his son’s name to TMZ earlier this month, explaining that the moniker is a homage to the late Michael Jackson. He told TMZ that the King of Pop used to refer to him as the Prince of Pop.

On Sunday, Aaron shared videos from the hospital while Melanie was in labor, keeping fans updated on baby Prince’s progress along the way. “Patiently waiting she took the medicine to induce her now we wait 4 hours,” he captioned a video. “Epidural then labor! See you soon my baby boy!! Stay strong baby!!”

Prince’s arrival comes after Melanie suffered a miscarriage last year. The couple, who announced their engagement in June 2020, shared the news in a YouTube live stream in June 2020, two months after they revealed they were expecting. “She suffered a miscarriage due to stress conditions,” Aaron said in the stream. “We’re gonna give it some time, let her heal, and then we’re going to try again. We both want that. I gotta take care of her.”

In an interview with PEOPLE in April 2020, Aaron said he was excited to become a father. “This is what we both want,” he said of having a baby. “We both were trying for it. I’m just focused on the future and being a dad. I want to be a good dad. I’m focused, my music career has been doing really well, and touring, having my clothing line out, all that stuff I have going for me that isn’t necessarily just music. Family is most important to me.”