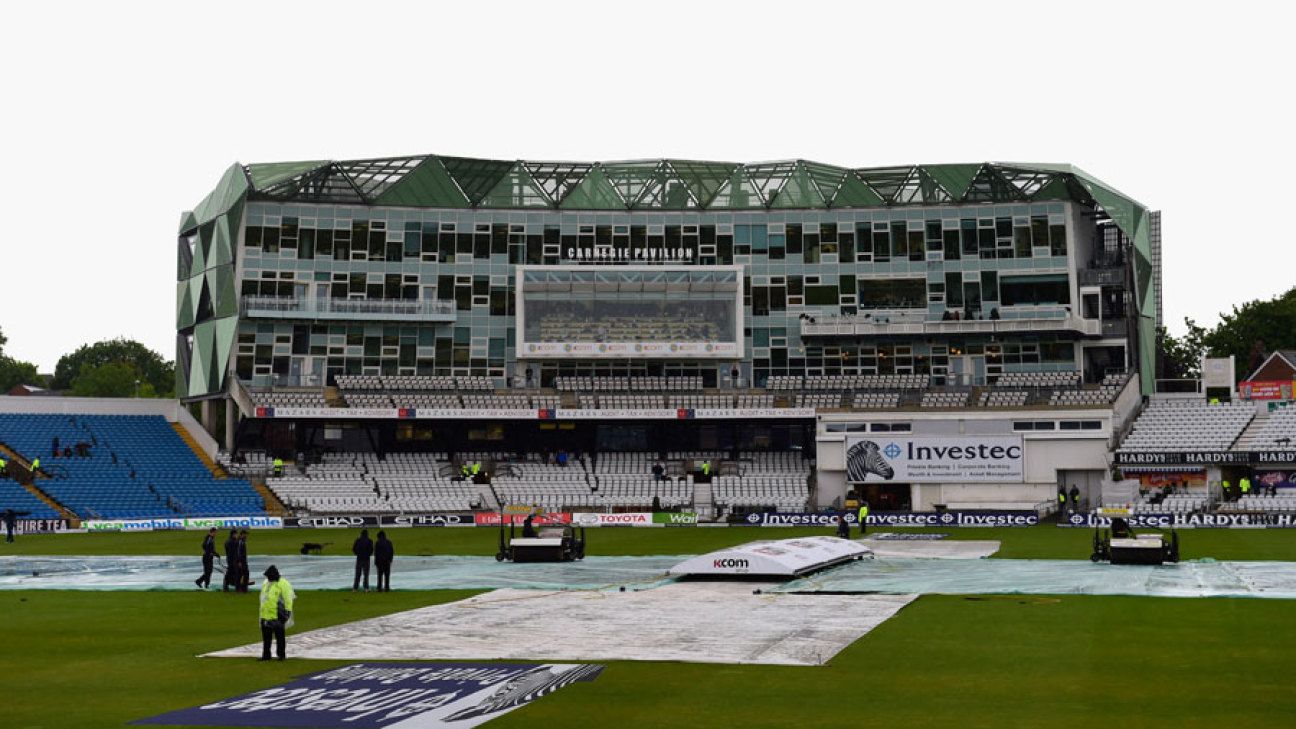 Perhaps we should have realised on Tuesday evening that the Roses match would end not with the two counties contesting a tightly-fought battle for valuable bonus points but with former players, now respected officials, agreeing that Monday’s twelve-hour downpour had saturated the Emerald Stand End to such an extent that further play would be hazardous.

And so the most interesting sight at Headingley on Wednesday morning was that of two umpires, two coaches, two skippers and a match referee holding a long socially distanced conference. The inevitable announcement was made at ten o’clock, just before most spectators were due to arrive and see nothing whatsoever happening. (The consolation for ticket-holders is that they are to receive a full refund for the price of their tickets on both Tuesday and Wednesday.)

There was at least qualified good news about Dominic Leech, whose horrific collision with the concrete base of the Western Terrace at 2.15 on Tuesday afternoon seems to have finally convinced the umpires that the players should be taken off the field. The 20-year-old has dislocated a joint at the side of his knee but an X-ray showed no broken bones and Leech will have an MRI scan today before seeing a specialist on Thursday. The highly-rated young bowler was at Headingley on this final day and will be forgiven if he never again regards the Western Terrace with quite the fondness felt by most Yorkshiremen.

The link between the accident and the umpires’ decision remains a little mysterious. Reports on Wednesday suggested the area where he slipped was quite dry and that the accident could therefore hardly be linked to the condition of the outfield in the shadow of the Emerald Stand, where damp patches had been made even wetter by the repeated impact of bowlers’ boots on the same spots.

But no criticism should be attached to the umpires, Ian Gould and Nigel Llong, who are two of the most respected officials on the circuit. Both men had been increasingly concerned about the condition of the outfield at that end of the ground and they can hardly be criticised if Leech’s dreadful misfortune had offered a graphic illustration of the risks all cricketers run when playing in stadia with stands a few yards from the boundary rope. Which of us would not be spooked a little by such an event? Ultimately Gould and Llong did the right thing.

And so our attention turns to the broader contexts of this most ill-starred Roses match. In the short term Yorkshire will be grateful that the forecast is for dry weather over the next few days. That should allow the Emerald Stand End to dry out sufficiently before Sunday’s T20 international against Pakistan. The Headingley hierarchy will then pray rather devoutly that Leeds avoids any further downpours before or during the Test match against India, which is due to begin on August 25. The plan then is that the underlying thatch, which is preventing moisture draining away, will be removed after the end of the season. The plan was to do that work last winter before the pandemic pressed the pause button on normal life.

But what of this season’s County Championship? Well Lancashire gained three more points than Yorkshire from this sodden draw and will now take 16.5 points forward into Division One compared to their rivals’ 4.5. Lancashire will be third in the Division One table when the County Championship resumes in late August, behind Warwickshire (21pts) and Somerset (18.5). Hampshire (8.5) are fourth and Nottinghamshire (5) are fifth. (The totals are half the aggregate number of points gained in matches between the two qualifying teams.)

But the current calculation has thrown up some curious anomalies and if the Conference system is used next year, as seems likely, it may need to be tweaked. For example, Nottinghamshire finished top of Group One but lost both their games to second-placed Warwickshire. They therefore carry just five points forward compared to the Edgbaston side’s 21. It might be an idea to award extra points for finishing top of each Group. One imagines Steven Mullaney would agree.

The Roses match also offered some statistical curiosities. For example, James Anderson has been selected in Lancashire’s side for four first-class games this season but has bowled in only two of them. Of more comfort to those in the Rossendale Valley may be the fact that Lancashire’s combined total in their two innings of this year’s Roses Matches is 920 for 11. (509 for 9 and 411 for 2). Such totals would not have been out of place in the era of Harry Makepeace and Eddie Paynter, and they are therefore tinged with rich remembrance

Meanwhile spare a kind thought for Gloucestershire. Having played some of the best cricket in the country during the first two months of the season, Chris Dent’s side were pipped for the last qualifying place by Hampshire, who beat them by three wickets at Cheltenham. Rarely has that glorious setting been the scene of such cruelty. Hampshire, by contrast, will rightly be delighted. They have prevailed during a ten-match programme and it will be fascinating to see how the next stage unfolds in August and September, when the world of cricket – indeed, the world itself – will probably look very different yet again.