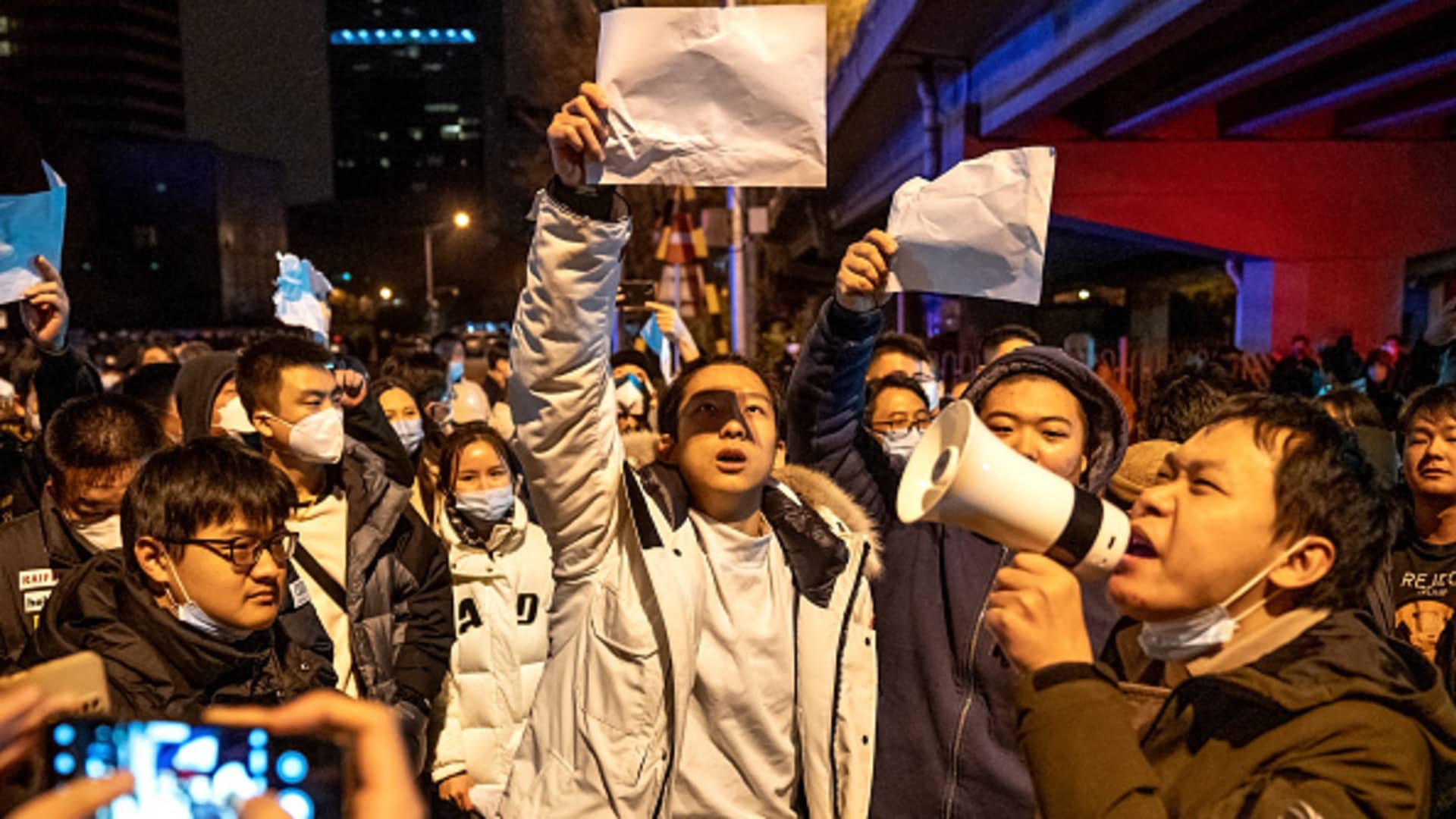 Traders on the floor of the NYSE

Here are the most important news items that investors need to start their trading day:

1. Eyes on China and data

Markets face a new test this week after protests broke out across China (more on this below). The unrest, driven by rage over the Chinese government’s draconian Covid controls, sapped Asian stocks and appeared to weigh on early sentiment before U.S. markets opened. Last week, stocks closed on a positive note after the Thanksgiving-shortened frame. This week, though, we’re back to business as usual. More earnings are on deck, including Hewlett Packard Enterprise on Tuesday, Salesforce on Wednesday and Kroger on Thursday. Friday will bring the October jobs report, which will fuel a new wave of speculation about the Federal Reserve’s next move in its battle against inflation. Read live markets updates here.

Chinese citizens’ frustration with President Xi Jinping’s harsh “zero Covid” policy spilled into the streets across the country over the weekend. It was a rare outburst of protest in the nation of 1.4 billion, which has contended with Xi’s increasingly tighter grip on people’s daily lives. While the government had indicated it may relax some of its Covid rules, which include strict quarantines and constant testing, cases jumped and officials put in place more controls. The protests started Friday in the city of Urumqi in Xinjiang province, where 10 people died in an apartment fire in an area that had been under lockdown for several months. Others popped up in Shanghai, Beijing and Wuhan, where Covid first broke out. In many cases, demonstrators held up blank white sheets of paper as an apparent protest against censorship. Some reports, meanwhile, said several protestors called for Xi to step down.

Black Friday shoppers wait to enter the Nike store at the Opry Mills Mall in Nashville, Tennessee, on November 25, 2022.

Bargain-hungry Americans opened their wallets over the Thanksgiving holiday, as crowds returned to stores and people shopped from their phones and computers while they watched football, dined on turkey and ignored annoying relatives. According to Adobe, online retailers set a record for sales on Black Friday, netting more than $9 billion. Cyber Monday is expected to be even bigger. Whether this momentum will continue all the way through Christmas remains to be seen, however. Consumers have already shown they’re being strategic with their spending: Even with deals starting in October, shoppers scaled back heading into November, indicating many were waiting to see what new deals would be in store down the line.

Sure, “Black Panther: Wakanda Forever” pulled off another superheroic performance at the box office over the weekend, ensuring Disney won another Thanksgiving holiday. But the studio’s big animated offering for the season, “Strange World,” tanked miserably. The movie, a retro sci-fi adventure with some 21st-century twists, put up the worst three-day opening weekend for a Disney animated film since 2000’s “The Emperor’s New Groove,” a movie that was notoriously racked with production problems. The failure of “Strange World” — which wasn’t marketed very strongly and underwhelmed both critics and the audiences who did see it — comes at a pivotal moment for Disney and is emblematic of problems Bob Iger has to straighten out in his second go-round as CEO. Iger, meanwhile, is slated to have a town hall with Disney employees at 12 p.m. ET Monday, at which he’ll explain his vision for the future of the company.

People use their mobile phone lamps to look at items at a sporting goods store during a power outage, after critical civil infrastructure was hit by a Russian missile attacks in Ukraine, as Russia’s invasion of Ukraine continues, in Kyiv, November 26, 2022.

Ukrainian President Volodymyr Zelenskyy warned the nation about more Russian missile attacks as citizens of the former Soviet country were already contending with mass power outages and frigid temperatures. “We understand that the terrorists are planning new strikes. We know this for a fact,” Zelenskyy said Sunday. “And as long as they have missiles, they, unfortunately, will not calm down.” Elsewhere, Kyiv Mayor Vitali Klitschko pushed back at Zelenskyy’s criticism that he hadn’t set up enough spots for city residents seeking shelter, warmth and support during the Russian raids. “I do not want, especially in the current situation, to enter into political battles. It’s ridiculous. I have something to do,” Klitschko said. Read live war updates here.

How Zelle is different from Venmo, PayPal and CashApp

Auto loan delinquencies are rising. Here’s what to do if you’re struggling with payments

U.S. plans to stop buying Covid shots for the public this fall. Here’s what that means for you

How the end of Netflix password sharing will change the way families watch, especially the ones with college-age children