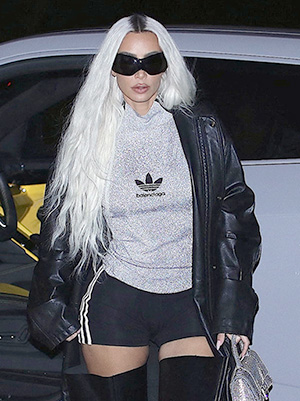 One month after Adidas ended its partnership with Kanye West following his antisemitic comments, Kim Kardashian showed her support for the brand. The reality star was photographed wearing a sweatshirt from Balenciaga’s collaboration with Adidas. Kim has been a big supporter of the Balenciaga brand for months, modeling many of the styles in public. This time, she paired the comfy sweatshirt with short shorts, thigh-high boots and a leather jacket.

Adidas announced it was ending its partnership with Kanye at the end of October after the rapper made ignorant comments online, which he refused to apologize for. Although Kim did not publicly speak out against Kanye specifically, she did condemn antisemitism in an Instagram post where she showed support for Jewish people at the time. Kim and Kanye split in Feb. 2021, and although they were declared “legally single” a year later, they’re still in the process of finalizing their divorce and custody arrangement.

Interestingly, earlier this week, Kim also stepped out wearing shoes from one of Kanye’s Yeezy collections. Meanwhile, Kanye himself shockingly continued to show support to Adidas by wearing the brand head-to-toe earlier this month, despite their falling out.

Kim has not revealed where her relationship with Kanye stands amidst his recent controversies. However, the two have seemingly been able to put on a united front for their children in recent weeks. They’ve both been spotted at sporting events for kids North West and Saint West following Kanye’s antisemitism remarks. Kim and Kanye have four children together.

“As upset as Kim is about all of this, she’s being careful not to say anything negative about Kanye in front of their kids and she’s asked everyone in her life to respect that,” a source told HollywoodLIife EXCLUSIVELY in October. “They’re all very careful not to put Kanye down if the kids are in earshot.”